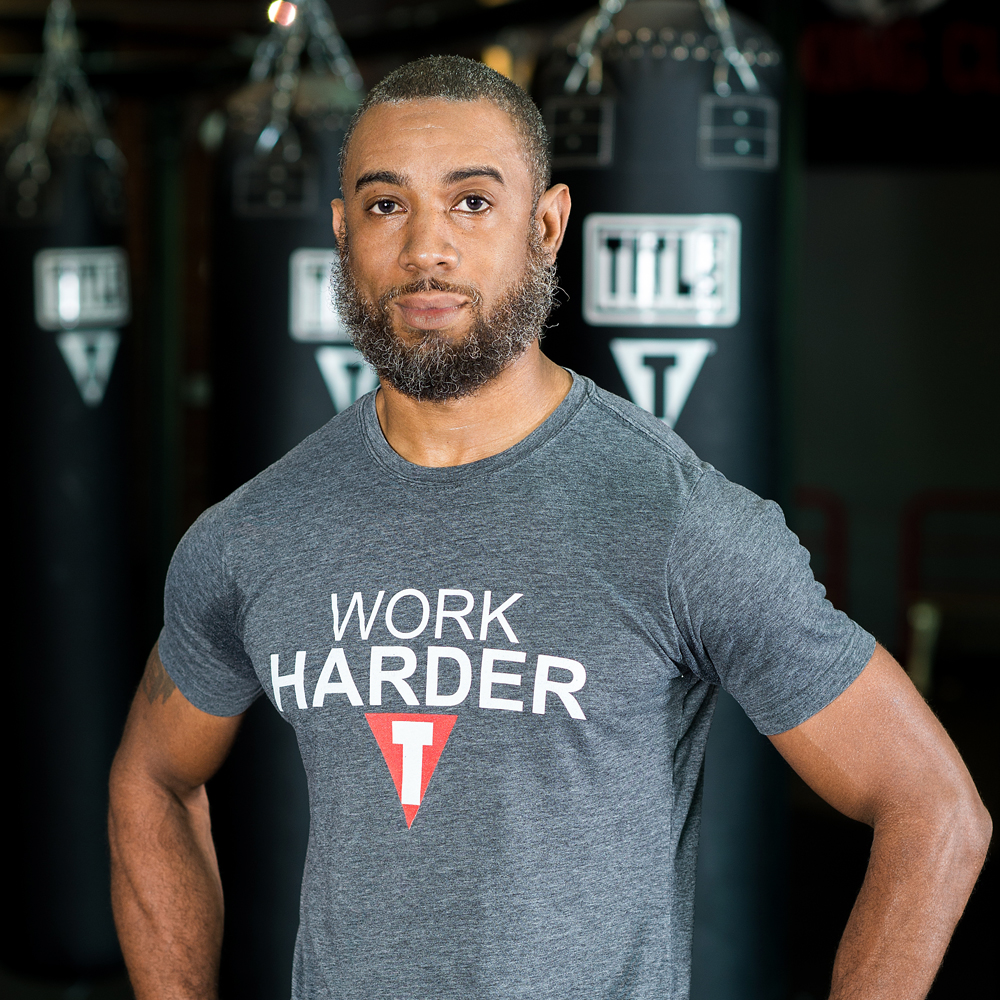 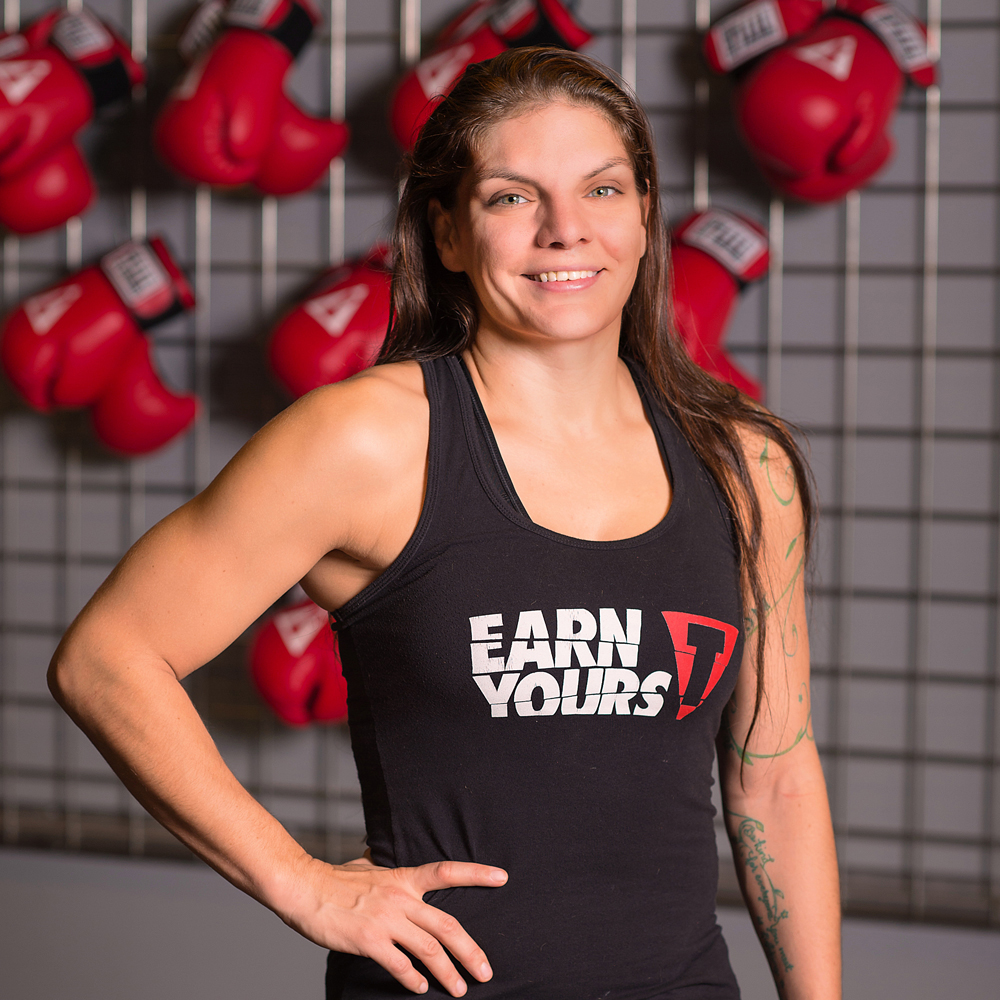 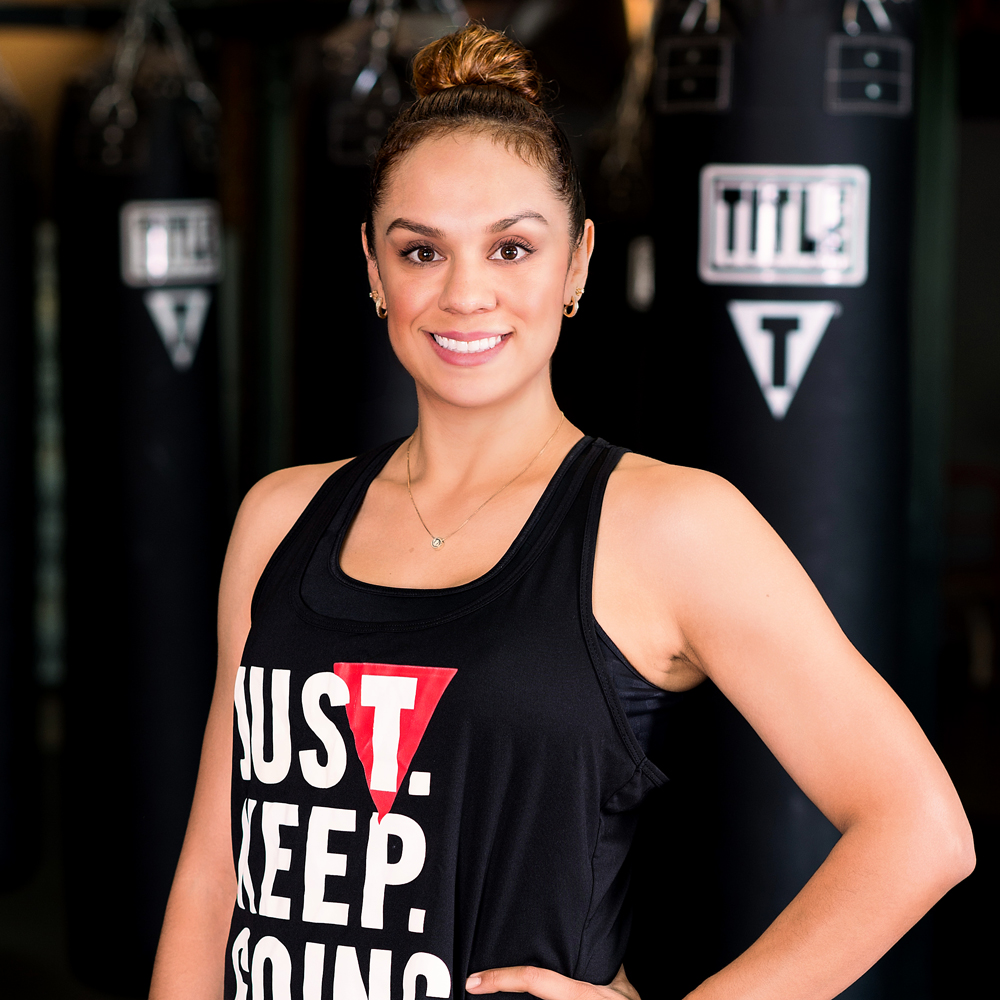 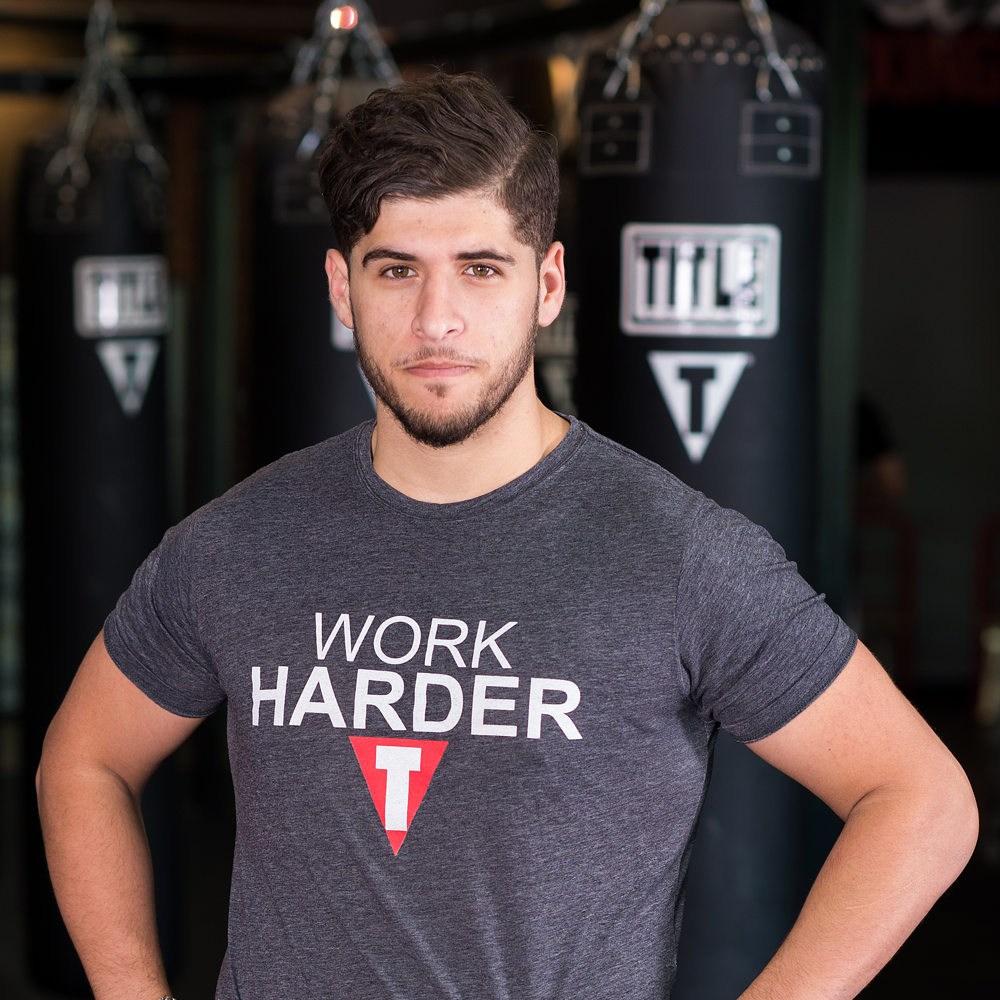 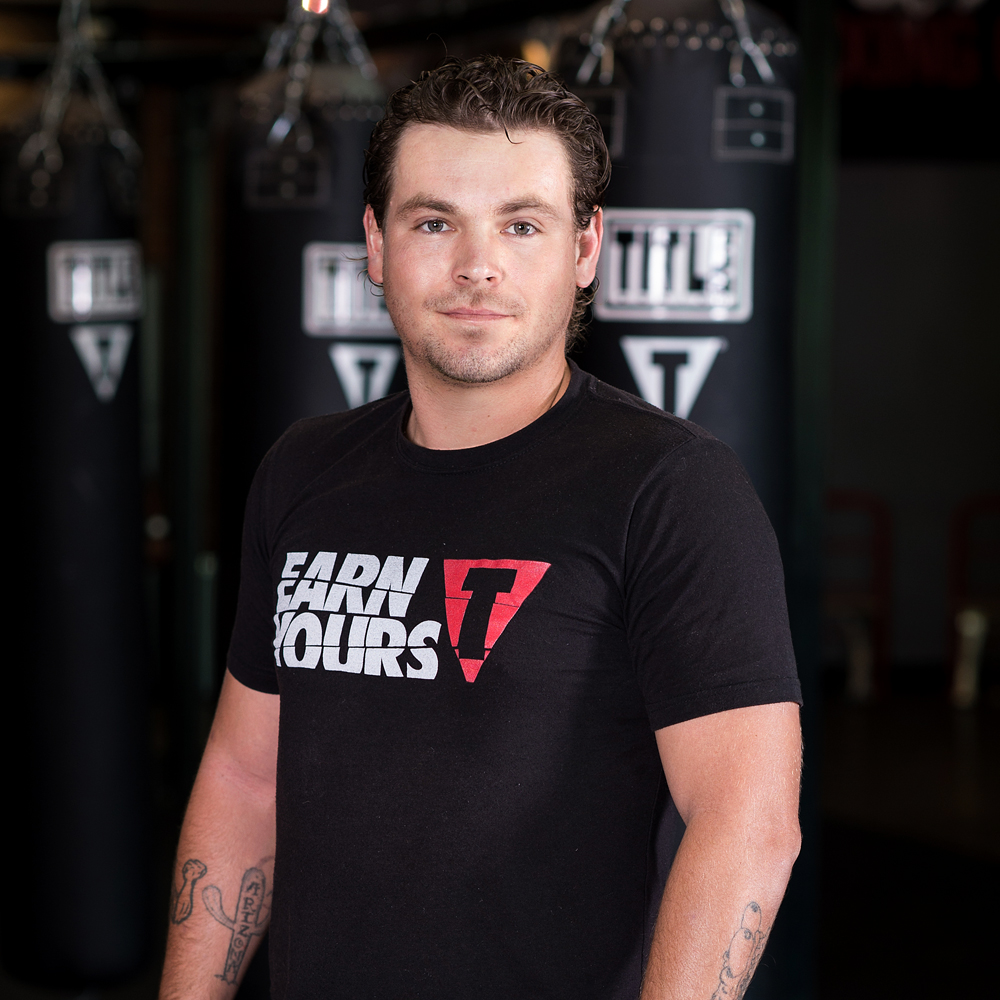 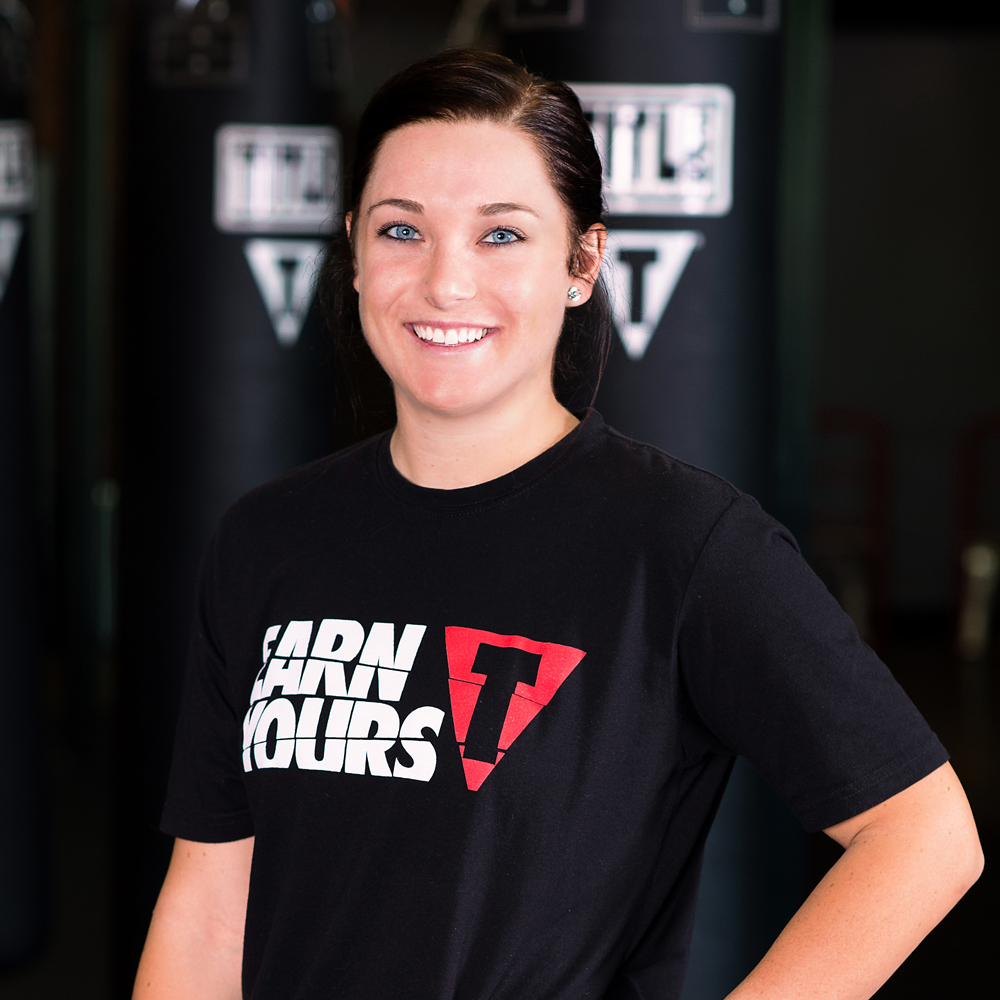 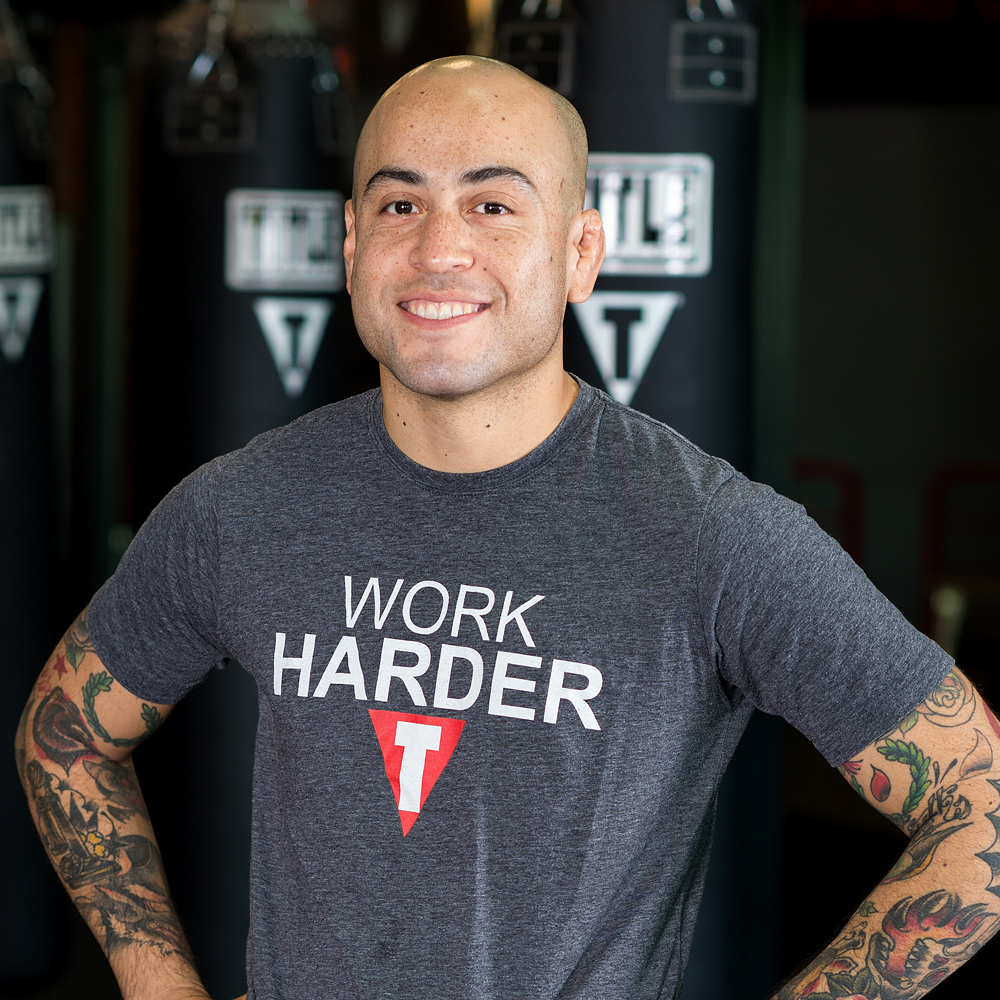 As a Military Veteran, Wiley knows firsthand how important fitness is to maintain a healthy life.  Fitness has been a passion for Wiley since high school. Originally from St. Louis, MO, Wiley moved to Arizona to further his career as a personal trainer/coach. When Wiley isn’t training, he enjoys reading and watching football-GO RAMS! Wiley’s biggest guilty pleasure is to eat chocolate chip cookies while watching The Walking Dead. Wiley is certified through the National Academy of Sports Medicine (NASM) as a personal trainer (CPT) and as a weight loss specialist (WLS). Wiley’s goal as your coach is to make you feel successful not just for today, but for the rest of your life.

My personal mantra:
"Quitting is not an option." "Own this moment."

My why:
I joined TBC for the opportunity to help members change and improve their health and overall state of wellbeing. In addition, I also want to do my part to eradicate the obesity epidemic.

What gives me my fighting spirit:
My fighting spirit comes from within, continually striving to be the “BEST ME” possible, so in turn, I will be the best resource for YOU.

Lauren started weight lifting and running on her own as a teenager, as a way to stay in shape, and unwind. She continued working out by herself well into her 20’s, with no particular goal or direction in mind other than to stay in shape and have some quiet time.

She did, however, always dream of taking up martial arts, and at the age of 26 she took up MMA. She started fighting professionally right away. In the span of four years, She fought eight times, winning all her fights, including three championship fights. In 2014 She was signed to the UFC, where she still competes today. Her current record is 9-3, with seven of those wins coming via TKO. She is also a UFC bonus winner, receiving Fight of the Night honors at UFC Fight Night 83.

Lauren holds a purple belt in Brazilian jiu jitsu, and has competed at many state, national, and world tournaments. She won the gold medal at the no-gi world championship in 2014, and the bronze in 2015. I continue to compete as often as I can and am looking forward to more gold medals, more championships, and more progress in my skills.

My personal mantra:
Live life to the fullest.

My training style is:
Transformative

My why:
Fighting is my passion, and boxing and kickboxing are obviously a big part of that. Showing other people how to throw punches and kicks, explaining why we throw the combinations we throw, and watching it give them confidence, fitness, and purpose, has brought my own understanding and enjoyment of martial arts to a whole new level.

What gives me my fighting spirit:
I want to be the best martial artist I can be. My life as an athlete is a dream come true for me, it’s part of living my life as much as I can. I don’t want to be ungrateful by wasting a single second of it. I also train hard because I hate to lose and I don’t like falling short of my personal goals.

Kim has always been an athlete competing in basketball, volleyball, gymnastics, ballet, tap, softball, etc. But her true passion was running. She ran track at Pima Community College with an athletic scholarship, and became a 5x All American in the 600m, 4 x 400m, and 4 x 800m races. After graduating community college she received a full scholarship to run track and cross country at New Mexico Highlands University. As an NCAA collegiate athlete she realized her passion and drive came from exercise. She continued her education in Exercise Science where she became certified by the National Strength and Conditioning Association (NSCA), Certified Strength and Conditioning Specialist (CSCS) and the American College of Sports Medicine (ACSM). Kim holds a masters degree in Exercise Science. Other certifications including kettle bell certification, RIP trainer certification, and TRX suspension training.

My personal mantra:
Think it, say it, do it.

My training style is:
Authentic and Fun

My why:
To grow as a trainer and to actively pursue my passion for helping people reach their goals.

What gives me my fighting spirit:
That little voice in my head that says, “I can do that.” And my family, I have the best husband and best kids in the world.

Joey first entered the world of Martial Arts at the age of three. He has trained in Tae Kwon Do, Judo, MMA, Jiu-Jitsu, and Boxing. He is a 3rd Degree Black-Belt and certified Instructor. Joey has trained with some of the most elite ranking black belts as well as Matt Hughes, nine-time Welterweight UFC champion. Academically, Joey was awarded several scholarships, including a full-paid honors scholarship to attend ASU and was named to the Dean’s list several times during his college career.

My personal mantra:
“Our greatest strength lies not in never failing, but in rising each time we fall.”

My training style is:
Heart

My why:
Life wasn’t easy for me growing up, whether it be physically, mentally, or emotionally, we all go through something at one point or another. I know what it’s like to struggle, that’s why I surround myself with people who have the potential to rise as I did.

What gives me my fighting spirit:
Being underestimated.

Competing and fighting has always been second nature for Ian. Ian’s parents introduced him to Karate at a very young age, mostly to keep him out of trouble. Ian felt a deep connection with the martial arts; always pushing his body and mind to the limits. Ian has trained in many different disciplines such as Karate, Boxing, Muay Thai and Brazilian Jiu-Jitsu.

My personal mantra:
Always strive to be the best you can be.

What gives me my fighting spirit:
My wife is my main motivation. The days I come home beat up and doubting myself she reminds that I can be great and I've tackled harder situations.

Emily has always been athletic ever since she could walk. She was always playing some type of sport or finding some way to stay in shape. When she was 18 she joined the Navy as a naval air-crewman. Three years later she decided to get into boxing and kickboxing in Jacksonville, FL. She fell in love with the sport and eventually became a trainer at TITLE Boxing Club Jacksonville.

My personal mantra:
“Do what you love, love what you do.”

My training style is:
Transformative

My why:
I started my training at TITLE Boxing Club as a member. As my love for the sport and the club grew I decided to try my hand at training. The transformation from being coached to coaching keeps me on my toes. I look forward to my continued growth as a member of the TITLE Boxing Club Team!

What gives me my fighting spirit:
The drive, motivation, dedication and transformation of our members.

Alex’s love of fighting started at a young age watching boxing with his dad. Alex was introduced to mixed martial arts in his teenage years. He gravitated towards Brazilian jiu-jitsu and judo. Alex holds many titles in BJJ. He holds a 4 striped blue belt in jiu-jitsu and a brown belt in judo. Alex has been a kids jiu-jitsu coach for several years. Certifications include personal training and TRX

My training style is:
Fun

My why:
I love being a part of someone's fitness journey.

What gives me my fighting spirit:
Punk rock music, friends and family.

Ben has been training since he was eleven years old. He started in judo that he now holds a brown belt in. I have trained in America wrestling, issenru karate , boxing , kickboxing, mma and Brazilian jiu jitsu. Ben was a fire fighter for seven years where he played an active role in the physical fitness training for the department. Ben is currently fighting at the professional level.

My personal mantra:
"Do work"

My why:
To better peoples lives through the sweet science of boxing.

What gives me my fighting spirit:
God

You have to invest in yourself... you're worth it.   Meet Cindy! A determined and bubbly TITLE Boxing Club Ahwatukee… Read More